Shark Tourism: Is It Possible To Have An Ethical Shark Dive? 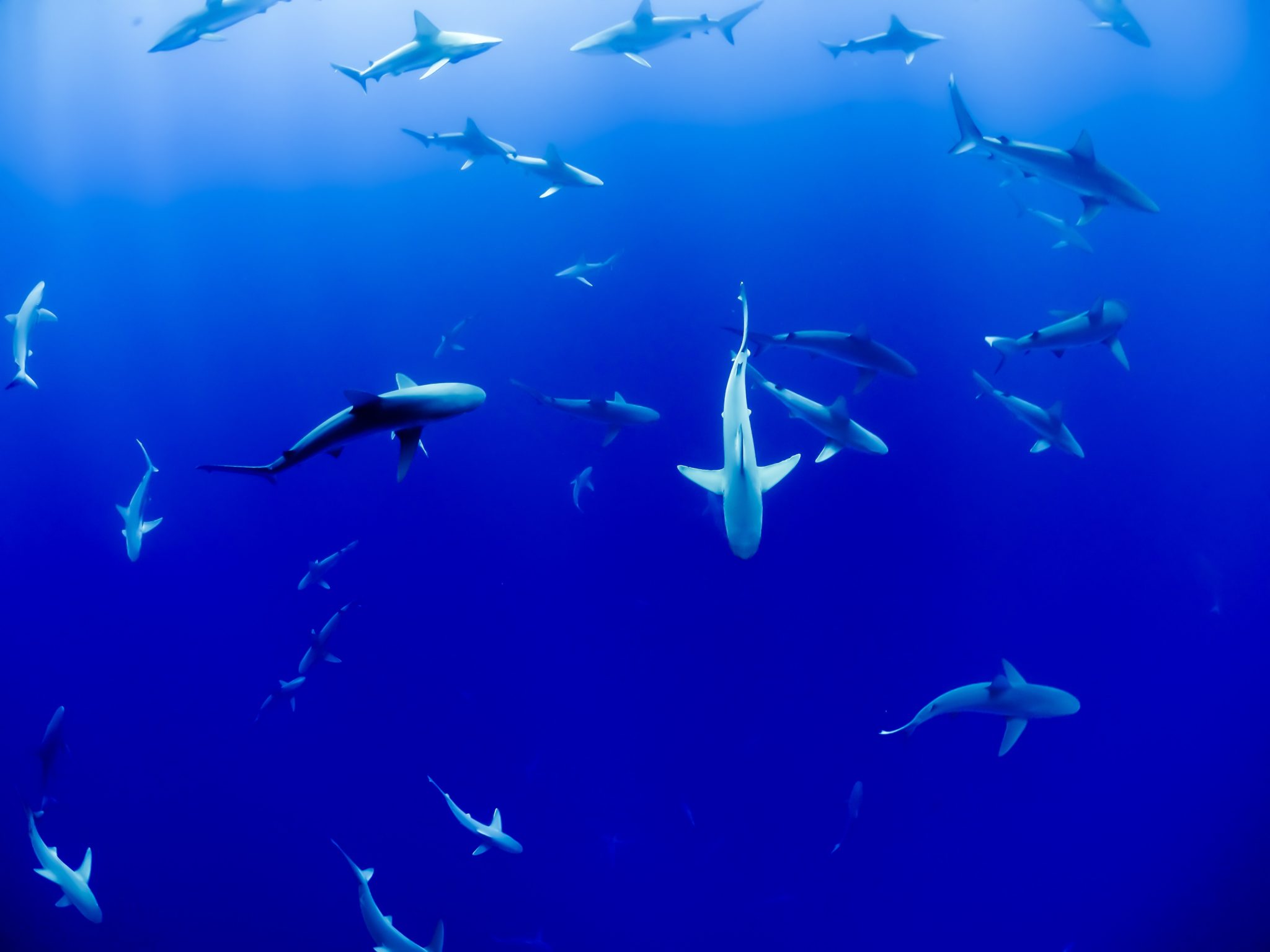 Shark Tourism: Is It Possible To Have An Ethical Shark Dive?

Many people have come to associate shark dives with the media-motivated fear of sharks as fearsome predators. What reader won’t conjure the bars of the JAWS theme song by the end of this sentence? And yet the fear of sharks is one of main contributors to their extinction. Movies like The Shallows and even, Sharknado continue to stigmatize sharks, when in reality, they are naturally shy creatures.

Several shark populations are threatened or endangered, and as with other species their preservation has come to rely on humans’ perceptions of them.

This is particularly important when one considers the issue of shark-finning. About 73 Million sharks end up in the shark fin trade industry each year. Hunters cut the dorsal fins off the shark for consumption and trade, and often throw the shark back into the water where they drown and are defenseless. Shark fin has become delicacy that people will often pay up to $400 per kg for. There are also cases of trophy hunting for certain shark species. These examples point towards a devaluation of sharks.

Although Great Whites are not on the top of IUCN’s (International Union for Conservation of Nature) Red List of endangered species, they are in the category of being threatened with extinction if trade is not controlled. This was also the reasoning I was given on my excursion in South Africa. One of the boatmen shared that in his opinion, without the tourism, the already endangered species, would be even more vulnerable. The trade industry, though (poorly) regulated is still not illegal everywhere.

For this reason, changing popular impressions of sharks has become an ecological imperative. The tourism industry can play a leading role in the necessary transformation of public opinion, and shark cage diving is a powerful PR tool at its disposal. However, shark cage diving, specifically with great whites, comes with a host of problems of its own. Like various aspects of ecologically sophisticated tourism, shark cage diving has mixed and often murky impacts. I’m going to try to unpack the pros and cons of cage diving here–hopefully, this will help you make more informed decisions of your own when you have the opportunity to jump in the water with these graceful creatures. 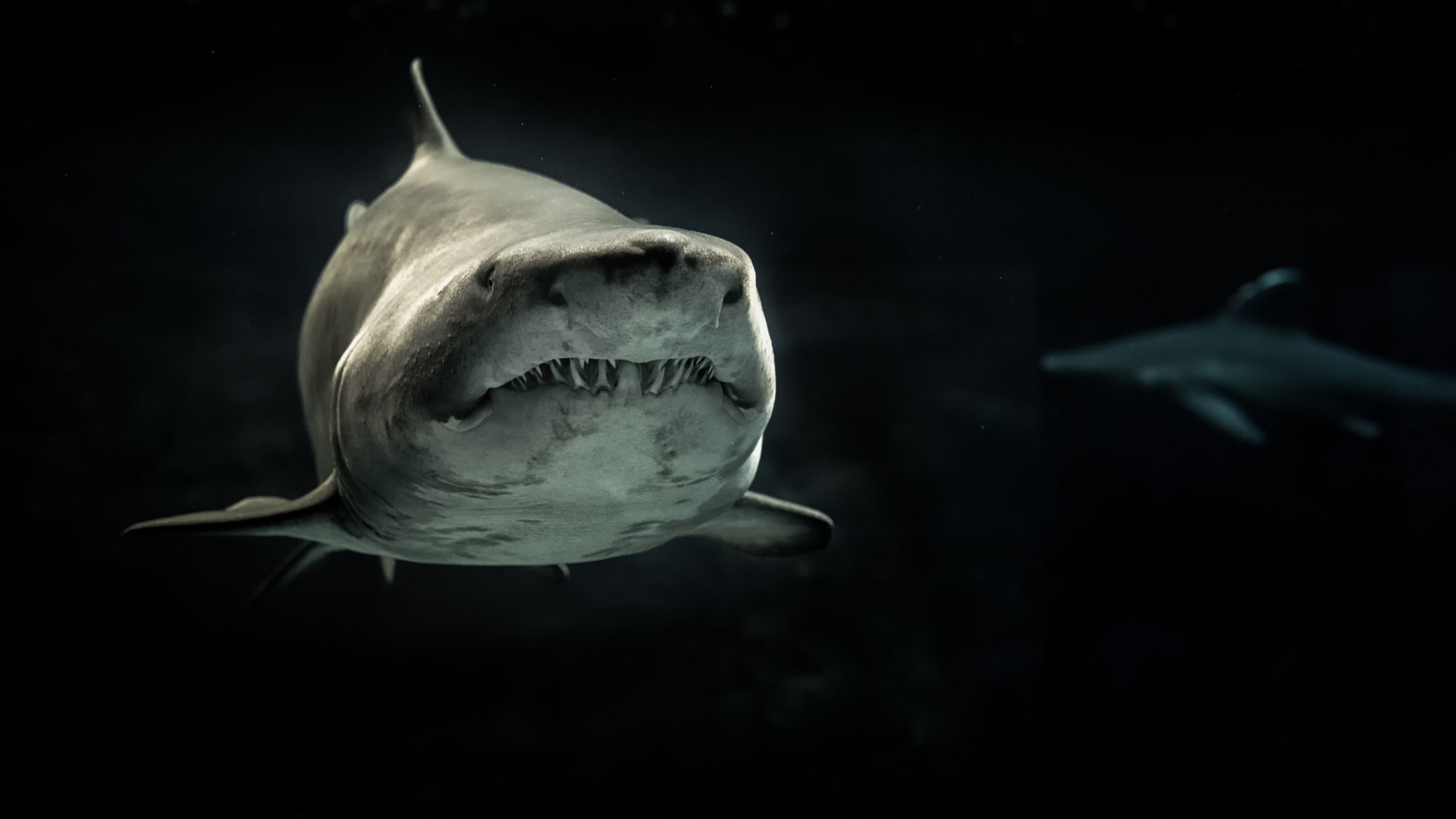 Full disclosure: I dove with great whites in Gansbaai, South Africa. At the time, I was just starting out on my journey to becoming a more ethical traveler. I went into the experience with a great deal of apprehension, not of the sharks themselves but of whether or not this was a sustainable or ethical activity. I read several blogs and articles on the topic and came away with no real conclusion. There didn’t seem to be a clear cut answer. At least not the kind of answer one might find about riding elephants in Thailand. With that in mind, I decided that I needed to see for myself. Would I feel different afterwards? Would it be immediately clear to me where the boundaries where?

I found an operator that offered small group tours and seemed to be participating in conservation efforts (though I later discovered that most operators say they do, but are culprits of greenwashing). This outfit was a founding member of an organization called the Great White Protection Foundation. So I thought, “Okay, this looks promising.” But I still wasn’t sure. I won’t go into great detail about the excursion itself but it was, as you might expect, exciting and educational. I had a great time but I also left with more questions than I had started with.

The Ethics Of Shark Dives 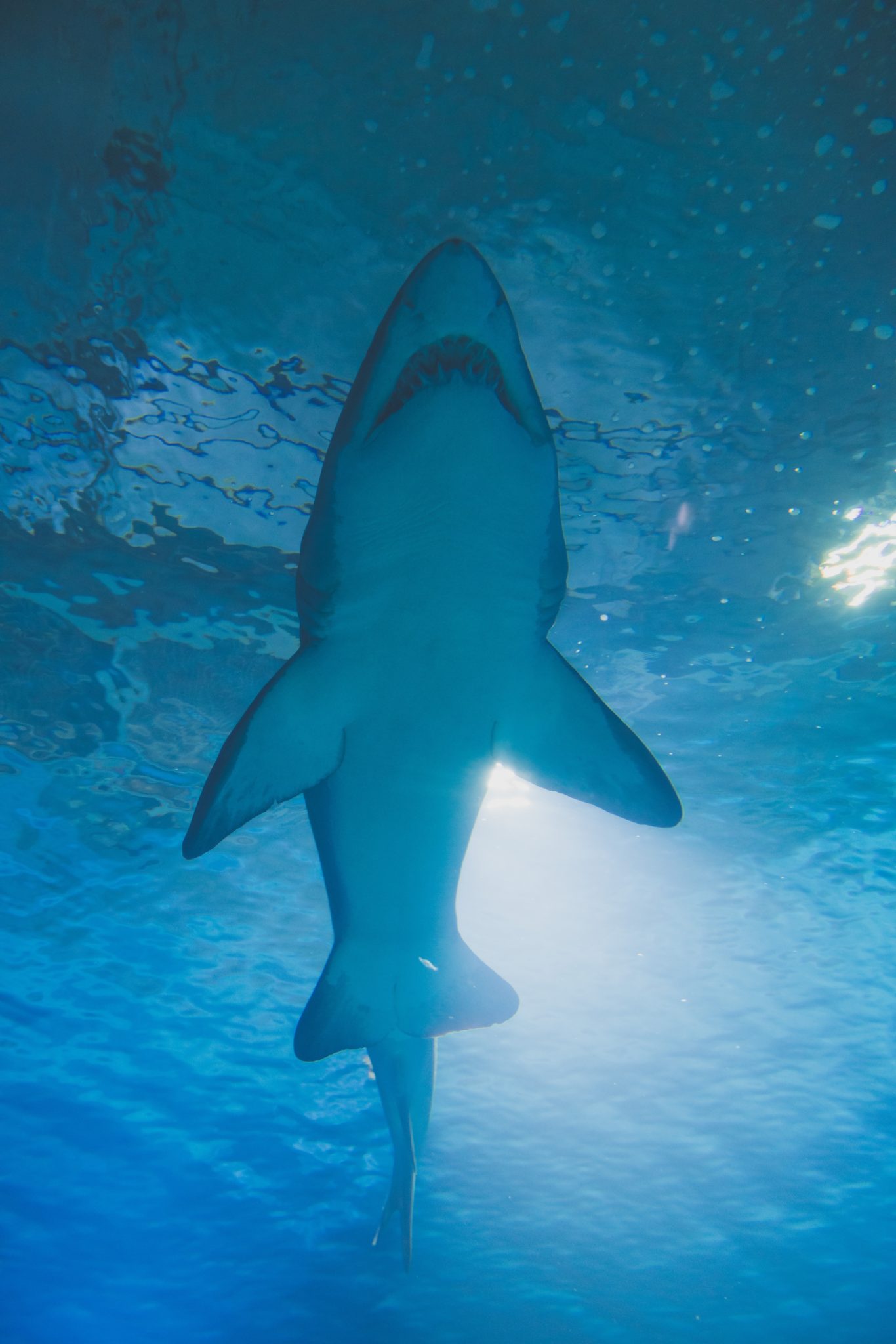 The underbelly of a shark. Photo by Patrick Brinksma on Unsplash.

Now that I’ve laid out the concerns, let’s drop the other shoe. 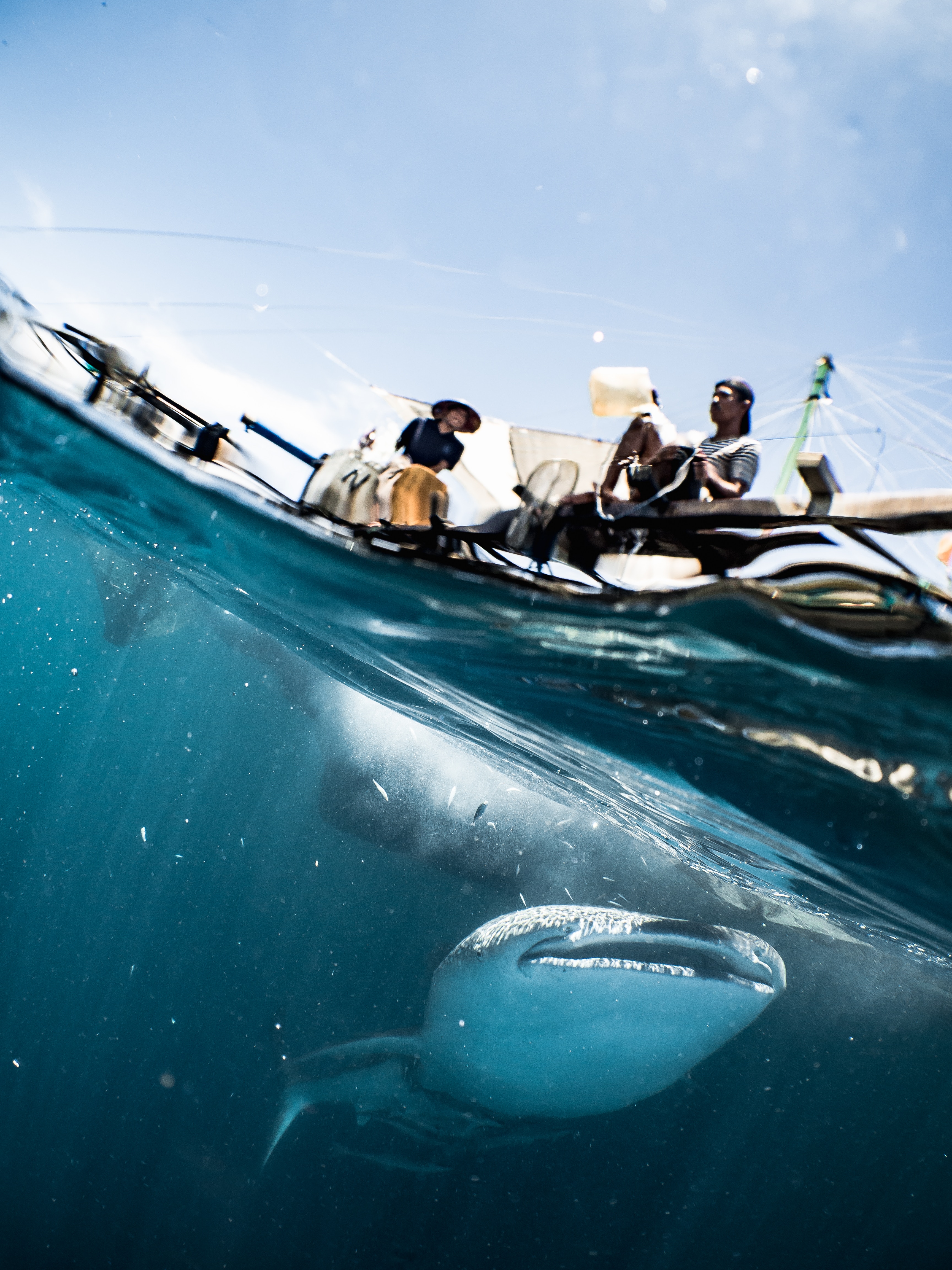 A whale shark beneath a boat. Photo by Michael I’Anson on Unsplash.

My personal research has led to conversations with a handful of conservationists and scientists who have presented arguments FOR shark diving. The most compelling argument is that interactions with sharks encourage humans to start valuing them and, in turn, support conservation efforts. A recent study carried out by two universities in Australia suggested that people who went on a shark-cage dive endorsed an increase in “conservation-related behaviors” and were more likely to have a favorable view of the sharks.

I spoke with conservationist Andy Corbe, who has devoted his life to the conservation of sharks and helping people get a more holistic understanding of the sharks. Andy promotes and prefers cageless interactions. But his perspective on great whites is more nuanced. He told me:

“I think the issue of cage diving is complicated and everyone has slightly varying opinions although most would agree, from a conservation point of view, if money wasn’t being generated via cage diving the value of the sharks would be only for their fins. First and foremost the future of sharks depends on a change of mindset, to replace fear with fascination and the best way for this to happen is to actually get people in the water with them. A friend of ours has been developing a shark repellent device that is built into surfboards that is specifically targeted to Great Whites, he has been going to the main cage diving sites for the last 4 years (South Australia, South Africa and Stewart Island New Zealand). He has been there chumming and testing both with and without the cage diving operations being present. In all cases he reports that the behavior changes dramatically and the sharks do get very competitive and aggressive once the cage diving boats arrive. This is a direct function of multiple sources of food and I would say being teased by the offer of food but not actually getting any (the dive operators are not meant to feed the sharks so they drag bait through the water in front of the animals to get them close to the cage). Some sharks do get very good at snatching the food anyway but they need speed and boldness and in this respect their behavior is changed. A bigger problem is that Great Whites seem to be showing more willingness to approach other boats which are usually recreationally fishing and often the people in those boats will feed the sharks to keep them around for some selfies, so the behavior is reinforced which can lead to negative encounters. Again I see this as a small potential issue compared to the positive impact that cage diving has for the preservation of Great Whites. I don’t believe that there is a direct link between Great White bites on people and cage diving, as the majority of incidents don’t involve boats. Great Whites are the only species where a cage is necessary for all but the most experienced shark divers but all other species can be safely done without a cage, which I think sends a better message and is a far better experience.” 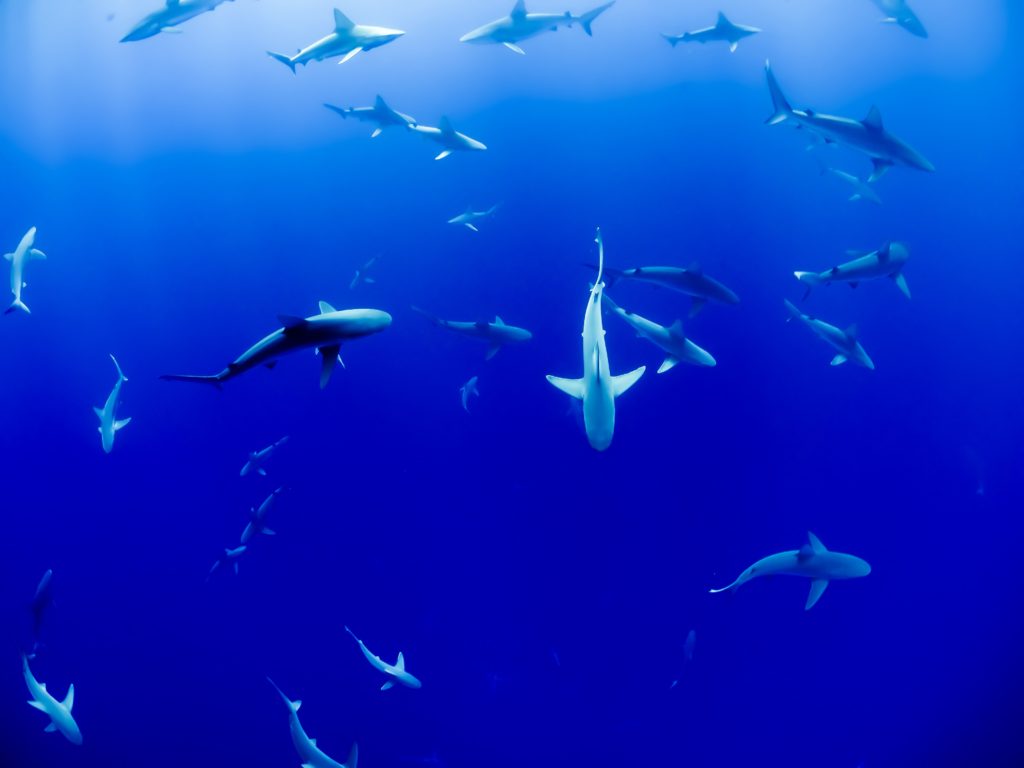 A nursery of sharks in Oahu. Photo by Jakob Owens on Unsplash.

Corbe presents a compelling argument for favoring dives with other species of sharks, especially when people can manage open dives. So how does the responsible tourism sector persuade folks to choose this option? Sure, the chance to swim with any shark is exciting. And yet many will retain a desire to  encounter the apex predator of the ocean: a great white. It would also be challenging to dismantle an already entrenched industry. Neither of these are reasons not to try or examine ways in which we can improve a problematic excursion. But they certainly impede an already challenging situation.

Perhaps the biggest to hurdle to overcome is an overall lack of research. A quick Internet search points to many of the pros and cons I have described here. Unfortunately there is very little empirical data to back any of it up. A team at the University of Miami is working to change that. Dr. Neil Hammerschlag, a lead researcher on the Biological effects, conservation potential, and research priorities of shark diving tourism, sent me a copy of his comprehensive review on the subject. The paper focuses on the following tenets: behavior, life history, ecology, social interaction, conservation, and policy. Within each of these domains, important questions such as “How does provisioning change the nutritional profiles of sharks?” and “How much are tourists willing to pay to observe sharks in the wild?” are asked.

Based on their research, the team has concluded “that under the right conditions and if done in a precautionary, responsible manner, shark diving can provide a net conservation benefit (i.e., garnering of protective measures, raising awareness, instilling a conservation ethic) for a handful of species.” 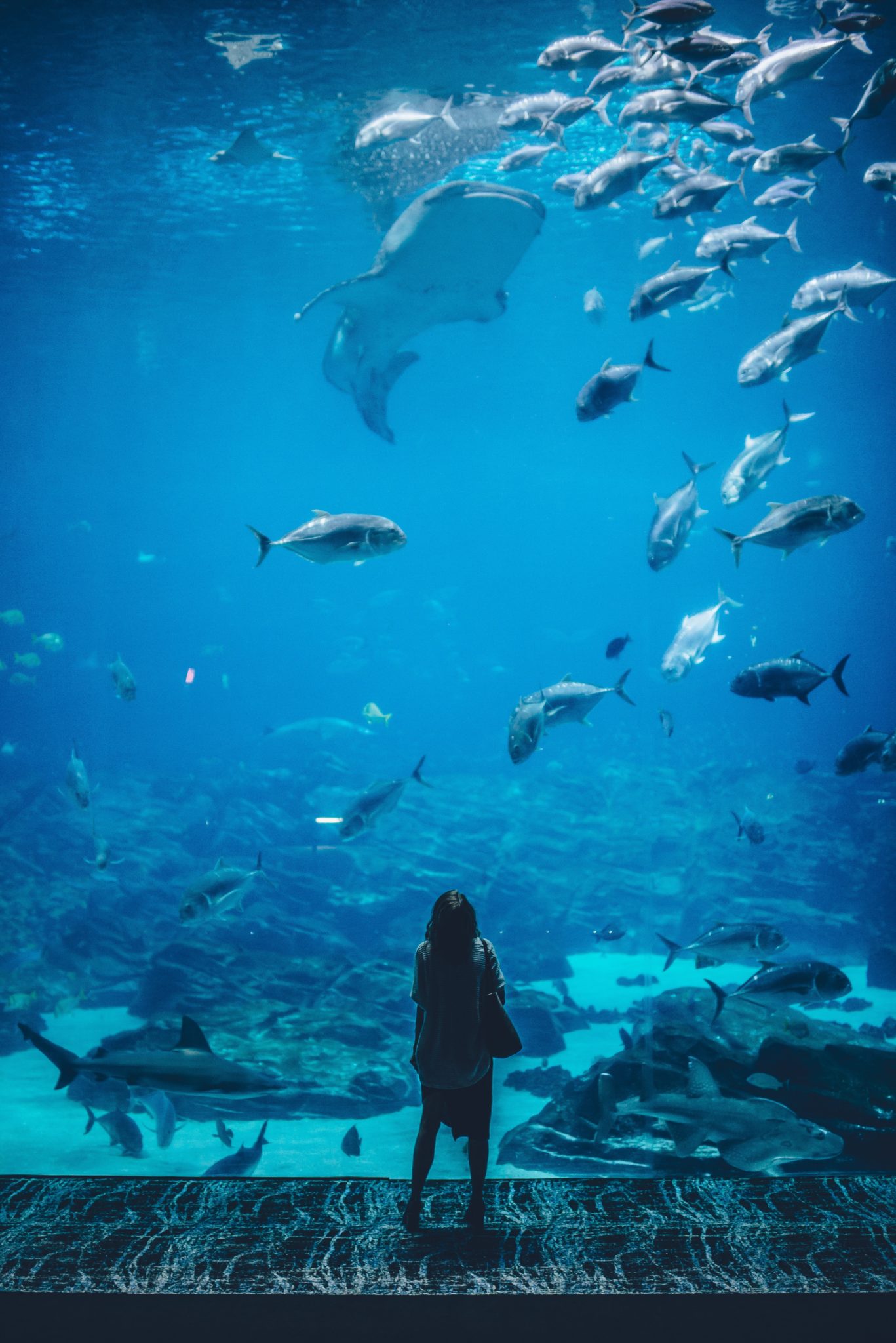 Girl looking at sharks in an aquarium. Photo by Ian Schneider on Unsplash.

The jury is still out on the overall impact of shark diving.

Hammerschlag and colleagues write: “While a strong foundation of research exists to begin assessing and making conclusions on the ecological and behavioral impacts of shark diving practices as well as its potential economic importance, many questions remain … The costs, benefits, and risks associated with shark diving are likely specific to the species, location, and perhaps even individual-level. Thus, as scientists, we need to be thoughtful about these challenges when we frame our research questions, as well as the limitations when we interpret our results.”

I think the question we should be asking is not, “to dive or not to dive?” but “why do (I) want to dive?” Motivation matters. It matters with most everything we do in tourism. It matters because it often has a direct impact on the environment you are interacting with. When we start looking inwards and examining why we feel drawn to something, it can lead us to make more authentic choices.

My suggestion is to really examine your reasons for wanting to do a great white shark dive. After my own shark dive, I wanted to be able to help my clients make an informed decision about participating in the activity. But I also (selfishly) wanted to experience the thrill of it. It was thrilling and it definitely left me with a profound respect for the creatures. And yet here I am, years later, still questioning whether or not I should have done it. Until the research convincingly points one way or the other, we at GST suggest avoiding it. On the other hand, we ARE going to encourage doing a cageless dive with other species of sharks and visit places like the Palau Shark Sanctuary. Or if you decide that doing a cage dive is for you, work with a company like this one, where they don’t bait the sharks.

Questions? Comments? We want to hear from you! Contact us. 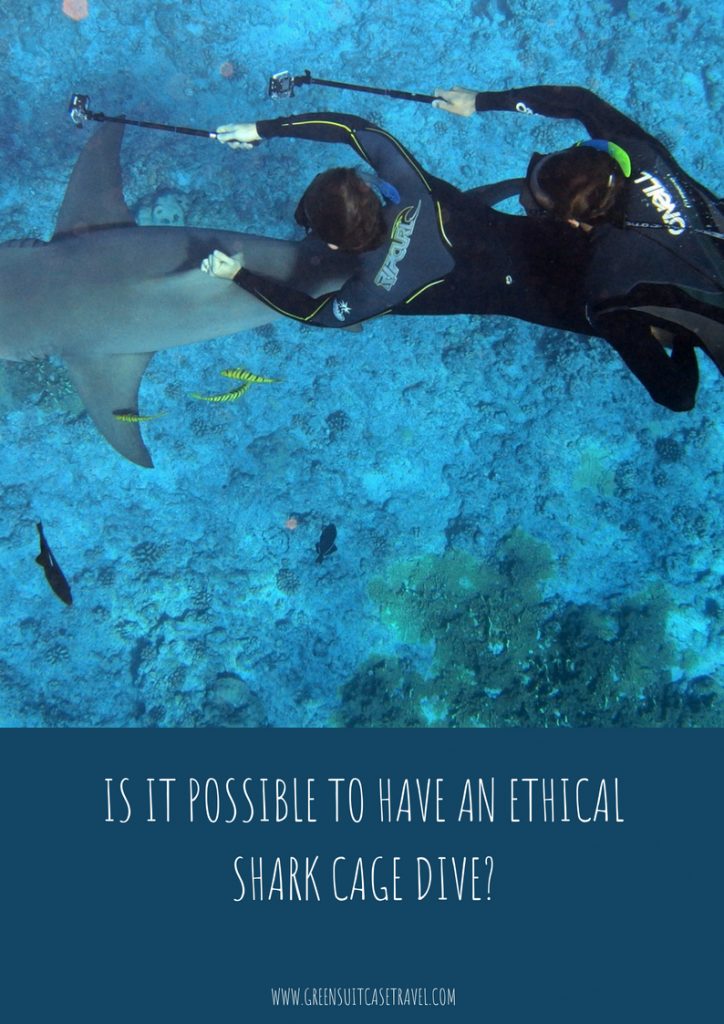 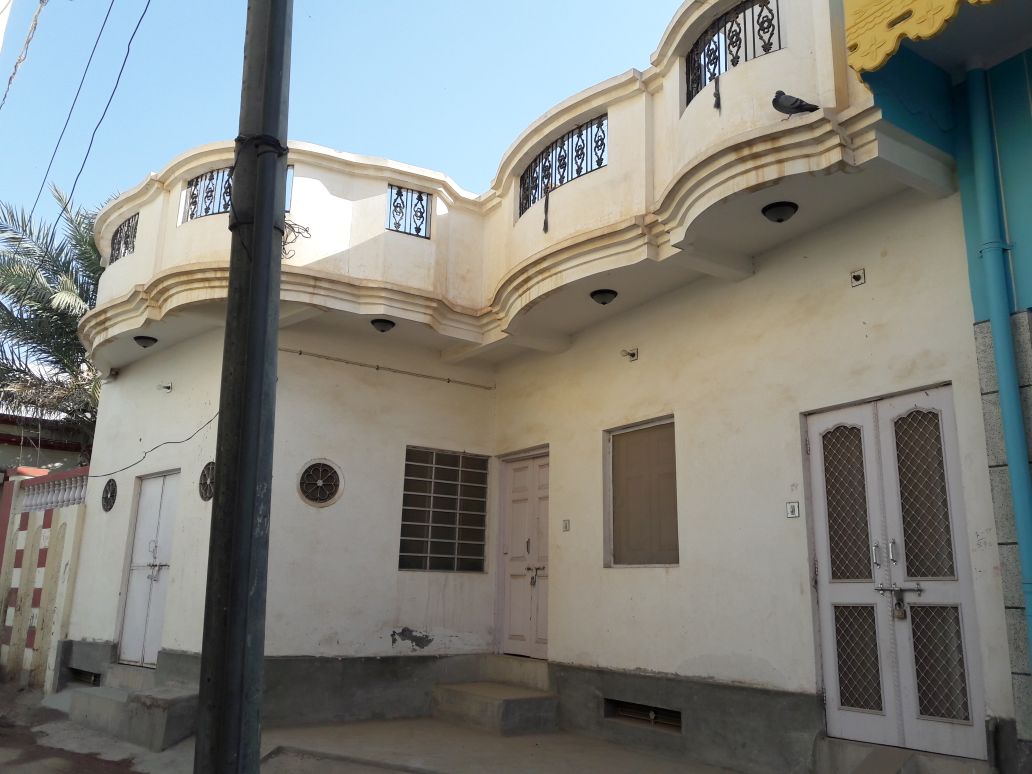